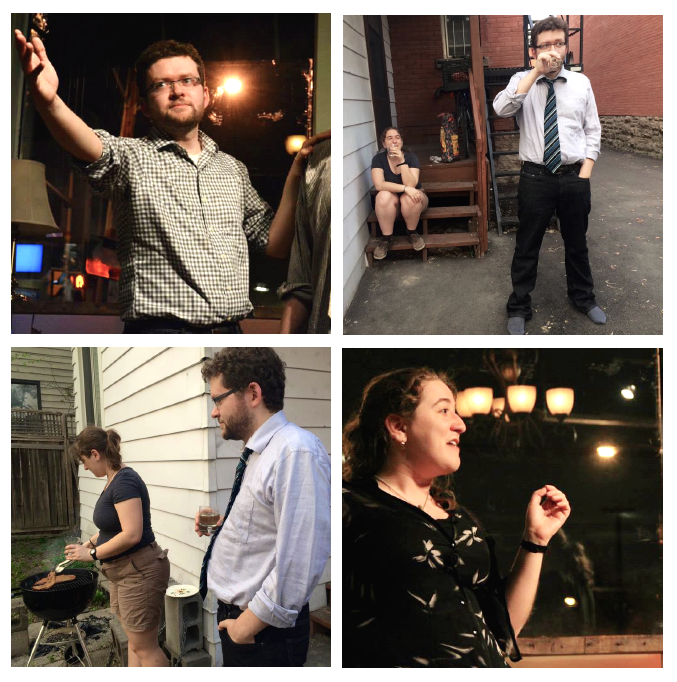 First time I was introduced to Chris Hannay and Dani Alon: Crush Improv’s monthly ‘Bout Time. I distinctly remember a hilarious scene in which “bullying” was their audience-provided inspiration, and then a series of, “What’s wrong chumpy?”

Needless to say, like most improv shows… you had to be there to get it.

The other evening, I got to hang out with these two to talk pop culture, dreams, and of course comedy.

I’m kind of awkward. So things were a little bit awkward. We didn’t have much common ground yet. When I noticed a list of titles for what seemed to be potential sketches for Experimental Farm Theatre’s Fringe show Just Like You, we found our vein: comedy.

If you’ve ever talked comedy with comedians, the discussion is rarely jokey or light; it actually takes on a very serious tone sometimes. It was the same with Chris and Dani that evening. We talked for a long time, going over their influences (definitely strong roots in Kids in the Hall) and comedic ideals—with the same kind of intensity and passion that I assume priests would exude when discussing morality or religion. EFT’s comedy seems less of a hobby and more of a life practise.

Two things really grabbed me about their approach to the work they do: EFT’s work ethic and their performance philosophy.

EFT approaches comedy and improv completely backwards! The last thing either Chris or Dani seem to care about is getting a laugh—even going so far as having made a no-puns rule. The 1-2 punch set up is not for them. Rather, their fundamentals lie in crafting an interesting story. When they speak about their work they are frank and to the point. They will admit when they’re off and have had a bad set—Chris describes the feeling after a bad set as one of the worst feelings in the world. But rather than beat themselves up about it, he takes it as a moment to learn and bounce back from.

To touch on their work ethic… EFT record every show, and not just to sit back and laugh at their own jokes (although part of me wonders if this was the fodder for material in EFT’s upcoming Fringe show). These performers take time to critically review their footage looking for ways to improve. There is nothing stagnant about this company.

Other Canadian cities like Montreal, Toronto, Calgary, and Vancouver are home to permanent improv comedy venues. Chris and Dani have told me they hope this is in the stars for Ottawa, too. On top of EFT’s monthly gig at Pressed and hosting workshops, the group will be putting on a sketch show at the 2015 Ottawa Fringe: EFT-up: Just Like You.

I leave you with a poem:

Both Chris and Dani trained
at Toronto’s Second City
and now
are putting the full array
of their skills on display.
These guys are here to stay.

And they are here for all the right reasons of making our city something great. Welcome to Ottawa, Dani, Chris, and EFT.